MONTEGO BAY, SEPTEMBER 10, 2010: Under the slogan “The future is bright, when you can read and write!” the Palmyra Foundation completed its 2010 distribution of books in Montego Bay today. The distribution team visited 11 public infant schools in St. James and 1 school in Hanover to hand deliver 7,000 books valued at US$60,000 to 2,000 pre-school children during their first week of school.

The distribution started Monday September 6th at Montego Bay Infant School and Catherine Hall Primary & Infant School, where 643 four year old children who had turned up for their very first day at school were handed book bags by The Palmyra Foundation team. 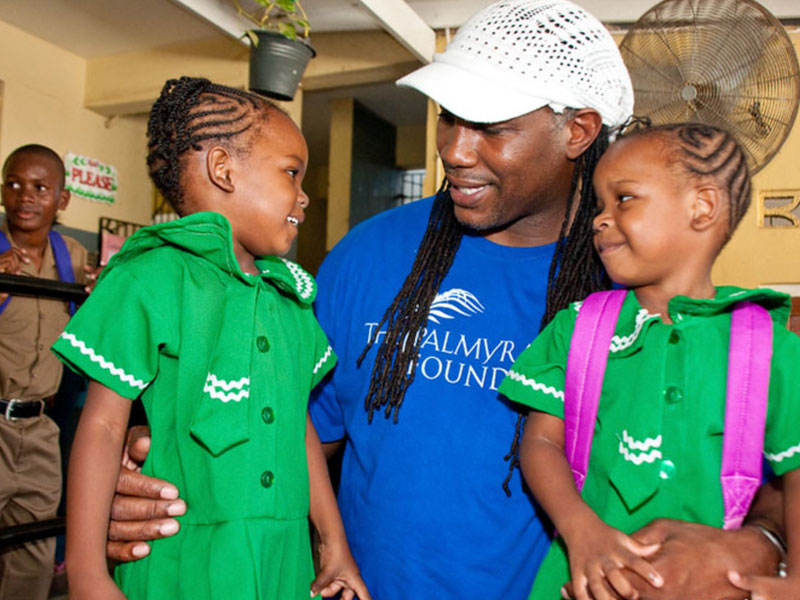 Boxing icon Lennox Lewis and his wife Violet helped make the first day of distribution a special occasion by joining the “literacy squad” who spent quality time with the children at Montego Bay Infant School.

“As usual, Lennox Lewis was happy to lend a hand when it came to the children of Jamaica. He is the champ for what he did today.”

Trotta remarked that although some of the 4-year olds may not have recognised the World Champion boxer, the school’s staff and parents were thrilled to see the famous boxing idol chitchat with the children while handing out pink and blue book bags.

The Palmyra Foundation team was back in action on Tuesday September 7th, when a group of all men sponsors handed out book bags to 520 five year old children at Montego Bay Infant School. Attorney Gordon Brown from Rattray, Patterson, Rattray; John Swaby from John Swaby Entertainment; Senator Noel Sloley Sr. from Jamaica Tours Ltd. and Barry Bonito from ADS Global Inc., were among the male role models who chatted with the children and made sure that each book bag was presented with proper ceremony. “I think the most gratifying aspect of the experience of sharing these gifts of learning with these delightful, energetic, hopeful children is the knowledge that we were there, with and for them from the very start. Today makes one reflect on the reality that it truly does take a village to raise a child and through the Palmyra Foundation, we are happy to play our part as our children’s keepers”, commented Gordon Brown.

Each child received their very own book bag with a pack of crayons, a pencil, a colorful 300 page BrainQuest Workbook and 2 or 3 Scholastic reading books at a value of US$30 per pack.

“The BrainQuest Workbooks will single-handedly give every child the opportunity to learn their letters and numbers.”

To measure the exact impact of the books on the children’s reading and writing skills, the Palmyra Foundation’s Program Committee is providing schools with a general skill test that will be administered both to children who have received the books and children who have not. “We are very excited to see what results the books will produce by the end of the 2010/ 2011 school year”; commented Ragni Trotta. “On behalf of the Foundation, I would also like to extend a big thank you to all the sponsors and volunteers who made this year’s book distribution possible.”

More than 40 volunteers handed out 7,000 books at a total of 12 schools during the week long distribution, which resulted in many smiling faces among everyone involved. Said Mrs. Monica Hinds, Principal at Montego Bay Infant School; “We are very grateful that The Palmyra Foundation is helping make our jobs easier.” Her comments were affirmed by several of the Principals at the other schools who received books from the Foundation.

To raise funds for next year’s book purchase, The Palmyra Foundation is hosting a big Fundraising Weekend at The Palmyra Resort & Spa, on November 5 and 6, 2010. The Friday beach concert on November 5th is featuring reggae ambassadors “Third World”, Tessanne Chin, Taurus Riley, Dean Fraser and several other performers who are supporting the non-profit charity through the musical beach party. On November 6th, the Foundation in hosting a Saturday Night Gala Dinner & Dance with Jamaican comedian Tony Hendriks, recording artist Cassidy, musician Dwight Richards and Jazz & Blues star Myrna Hague Bradshaw. A golf tournament is also planned for the weekend.

CONTACT
Kevin Knight2021-02-23T16:11:44+00:00
Page load link
We use cookies on our website to give you the most relevant experience by remembering your preferences and repeat visits. By clicking “Accept”, you consent to the use of ALL the cookies.
Cookie settingsACCEPT
Manage consent