MONTEGO BAY, SEPTEMBER 17, 2012: The Palmyra Foundation is delighted to announce that The Most Honourable P.J. Patterson, former Prime Minister of Jamaica, will personally distribute bookbags to the students of Somerton All Age & Infant School and Industry Basic School, St. James parish, on Wednesday September 19th at 10:00 am. The most famous personality to join the charity’s ranks of volunteers, Mr. Patterson will bring his special brand of magic to the Somerton school children. 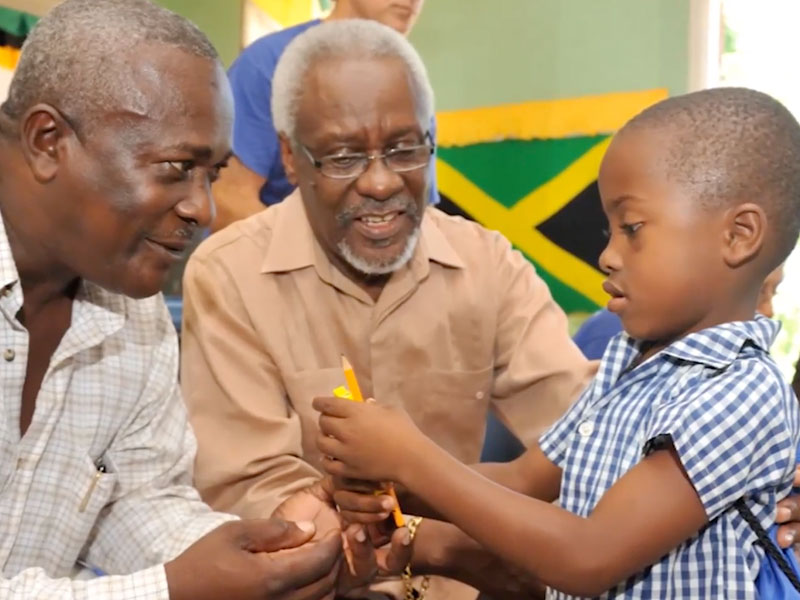 A graduate of the University of the West Indies Mona Campus and the London School of Economics, Mr. Patterson continues to have great affection for his childhood school.

Written into the history books as the first Prime Minister of Jamaica to be sworn in for four consecutive terms in office, Mr. Patterson entered politics in 1969 campaigning with the slogan “Young, gifted, and black”. After winning a by-election to a seat in Western Jamaica, he was elected president of the People’s National Party (PNP) and appointed Prime Minister in 1992 upon the retirement of former Prime Minister, Michael Manley.

With an unprecedented 14 years in office, the very presence of Jamaica’s longest ever serving Prime Minister helps bring much needed attention to the importance of Early Childhood Education. Stated Glendon Brydson, Principal of Somerton All Age & Infant School since 2007; “We are extremely happy to receive former Prime Minister Patterson. He is an outstanding role model, and we want our students to look up to him and emulate him.”

One of the most legendary politicians in the Caribbean community, Mr. Patterson has come a long way since he frequented the classrooms of Somerton All Age, a school which has nurtured a host of other famous alumni including reggae icon Jimmy Cliff, former Speaker of the House and Member of Parliament Violet Nielson, playwright Lenny Little White and nutritionist Heather Little White through their early years. Said Principal Brydson about why this little rural school in the hills of St. James has managed to turn out so many successful alumni; “It is due to the dedication and commitment of our teachers. Our students strive to excel and do better each year. The parents also greatly assist.”

With the best GSAT results in the constituency, the large collection of awards that decorate Principal Brydson’s office also bear witness to the school’s commitment to cultivate and develop all facets of each individual student. Explained Brydson; “Our aim is to ensure that students are well rounded. We focus on all types of extra-curricular activities, including sports, arts, dance, essay-writing and so on.”

Somerton Infant Department has seen a marked improvement in the proficiency of their Kindergarten children since the book program’s startup in 2007. Explained Principal Brydson; “The fact that all the children have their own books to work with makes it easier both for the children and the teachers. We see the results.”

Under the slogan “The future is bright, when you can read and write!”, The Palmyra Foundation is currently in its third week of distributing bookbags to 5,750 school children at 70 schools, valued at over US$170,000.

“It is an excellent gesture and an important contribution to the development of the intellectual future of our country. I applaud the work of the foundation. It has provided genuine relief to thousands of children in our parish.”

The Palmyra Foundation continues to collaborate closely with the Early Childhood Commission and the Ministry of Education of Jamaica.

CONTACT
Kevin Knight2021-02-23T16:05:56+00:00
Page load link
We use cookies on our website to give you the most relevant experience by remembering your preferences and repeat visits. By clicking “Accept”, you consent to the use of ALL the cookies.
Cookie settingsACCEPT
Manage consent