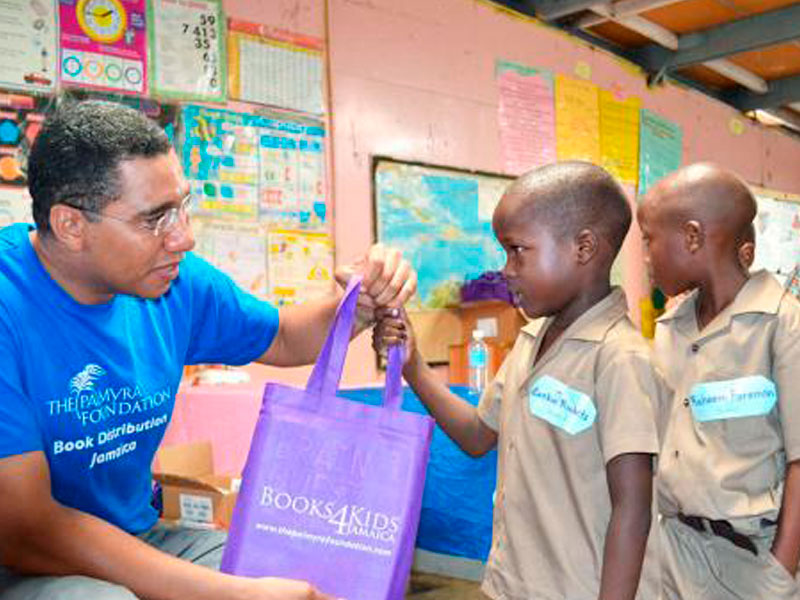 “Education is the vehicle of social mobility. Sponsoring, assisting and supporting the education of our children is the greatest gift one generation can give to the next. I am very pleased and deeply thankful for the support Books4Kids Jamaica has given to the children of Four Campbell’s Academy.”

Pointing to unaffordable school fees as a major stumbling block for early childhood development, the Prime Minister stated that the Governments addition of new infant departments and pre-school classrooms will give more young children access to public education without fees. Prime Minister Holness commended The Palmyra Foundation’s contribution to the country’s youngest citizens through the Books4Kids Jamaica initiative, which provides children with all the materials necessary to learn the basic literacy and numeracy skills at an early age.

The 80 Kindergarten children registered at Four Campbell’s Academy are among 1,200+ students at 15 schools in Kingston, St. Andrew and St. Catherine who will receive books and materials from the initiative this autumn. In total, the Books4Kids Jamaica program will provide books and school materials to over 11,000 children at 120+ schools across 12 parishes during the 5 week long distribution, a contribution valued at US$150,000.

A seasoned volunteer, Holness has previously participated in the foundation’s 2013 and 2014 book distributions in his role as Leader of the Opposition. This year, he honoured the program by participating in his role as The Most Honourable Prime Minister of Jamaica.

Prime Minister Holness was joined by Senator Councillor Delroy Williams, long term charity sponsor and Goodwill Ambassador Alsion Roach and entrepreneur Omar Wilson at the Four Campbell’s Academy book distribution. Said The Palmyra Foundation’s Founder Bob Trotta; “It was an honour and a privilege for us to have Prime Minister Holness participate in our 2016 book distribution.”

The charity’s main sponsor and benefactor, Trotta has carried all operational costs and administrative salaries since the charity’s 2007 startup. Over the last 9 years, the Palmyra Foundation has invested over US$1,2m in Early Childhood Education in Jamaica through the Books4Kids Jamaica initiative.

“When you invest in a country, you invest in its people. The ability to read and write is the fundament for all learning, and there is nothing more important you can do for any country than help to educate its youth. Ultimately, it will help them become productive members of the country’s workforce.”

With record participation, more than 100 Books4Kids Jamaica sponsors and volunteers in 10 parishes have travelled around the country to hand deliver books to the island’s Kindergarten children this September. Under the slogan “The future is bright, when you can read and write!” The Books4Kids Jamaica program provides 4 and 5 year old children with a book bag containing a 300-page Brain Quest Workbook, a reading book, crayons and a pencil, while 3 year old Kindergarten children receive a small ABC book, crayons and a pencil.

The charity receives no grants from government bodies and raises funds to purchase books for the children on an annual basis through it’s annual Online Charity Auction. www.books4kidsjamaica.com

CONTACT
Kevin Knight2021-02-23T15:47:40+00:00
Page load link
We use cookies on our website to give you the most relevant experience by remembering your preferences and repeat visits. By clicking “Accept”, you consent to the use of ALL the cookies.
Cookie settingsACCEPT
Manage consent